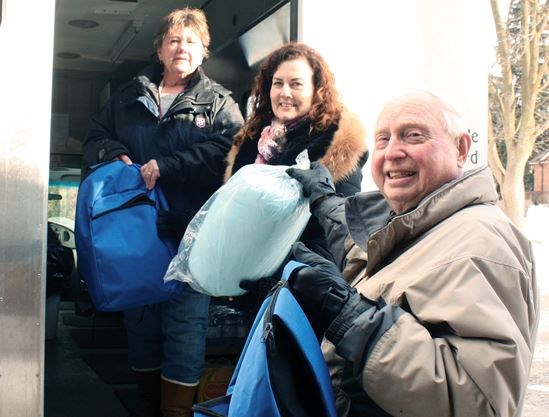 NIAGARA FALLS — While most of us complain about the cold, we also have a place we call home, where we can snuggle up by the fireplace with a hot beverage and keep winter a bay.

But there are many in the community who don’t have that luxury.

The Rotary Club of Niagara Falls is doing its part to help, and late last week, the service club donated eight winter survival packs to the Salvation Army to hand out to those in need as its outreach truck winds its way through the city, providing warm drinks and meals to those in need.

“We’re glad to do it and provide a little bit of help,” said Rotarian June Mergl.

‘We’re glad to do it and provide a little bit of help.’
— June Mergl,

Rotary Club of Niagara FallsThe survival packs, which contained such things as a sleeping bag, hat, scarf, gloves, water bottle and personal items, were obtained by the Rotary Club from Engage and Change, a Toronto organization that distributes survival packs in that city.

“A good 1,200 organizations applied for the packs,” Mergl said.

In addition to the Salvation Army, survival packs were also donated to outreach programs at Southminster United and St. Andrew’s United churches and a fellow Rotarian who has forged a connection with people in need on Bridge Street.

“It’s one of the coldest winters Niagara Falls has seen in many years,” said Lt. Curtis Metcalfe of the Salvation Army Niagara Falls. “The community has been amazing.”

Salvation Army outreach worker Karen Johnson said on a regular trip through the city, the organization will see anywhere between 75 and 105 people.

She said when the outreach efforts result in someone needing help finding shelter, arrangements are made.

“We arrange for transportation or some kind of service,” Johnson said. “We’re there to help them, guide them.”