Scorching temperatures set to last through the long weekend 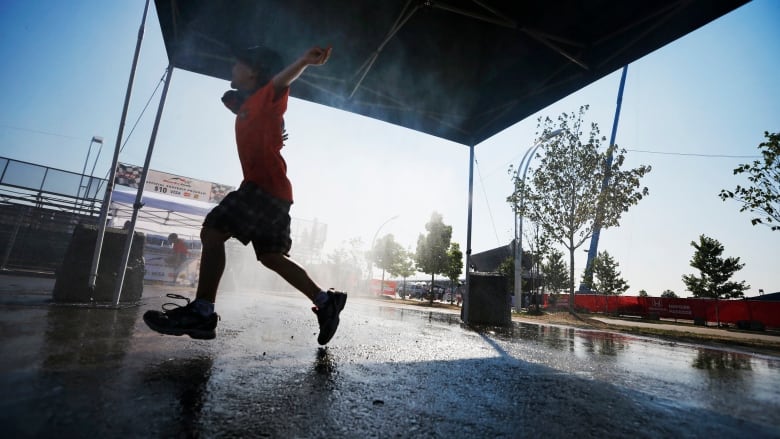 Hot, humid summer weather is expected to start today and last at least until next Tuesday, prompting a heat warning from Environment Canada.

Daytime highs are expected to hit the low- to mid-30s, with humidex values going into the mid 40s. The temperature is also expected to stay above 20 C overnight.

“This will likely be the most significant heat event of the season thus far,” Environment Canada said in a weather statement early Tuesday.

By 3:30 p.m. the temperature was just under 30 C, prompting the agency to issue a heat alert.

While some will welcome the hot weather, it’s a serious concern for those living with health issues as well as Toronto’s homeless population. Groups working with the homeless are already handing out kits complete with drinking water, and warning dehydration can be as risky for vulnerable people as extreme cold.

‘The humidity in Toronto is… ridiculous’ 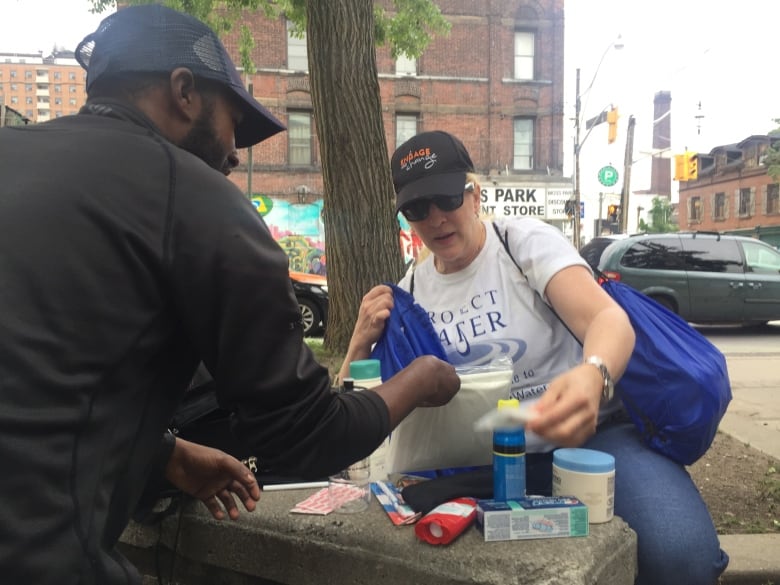 Jody Steinhauer, right, gives Omar Adan a kit to help him deal with the hot weather. Adan has been staying in a downtown shelter and says he’s worried about what the conditions will be like amid a potential heat wave. (Lorenda Reddekopp/CBC News)

Omar Adan, who said he’s experiencing homelessness for the first time since losing his job, is worried about how he’ll handle the heat wave.

“The humidity in Toronto is really ridiculous,” he said, while being interviewed near the downtown shelter where he’s staying.

“The rooms get really warm, because you’ve got, like, eight guys sleeping in the same room.”

The hot weather arrives as Toronto’s shelter system is under stress, as more and more refugees arrive in the city.

Jody Steinhauer, the founder of the charity Engage and Change, has been handing out handed out bright blue backpacks of summer survival gear to those new arrivals and other homeless people, along with bottles of water. 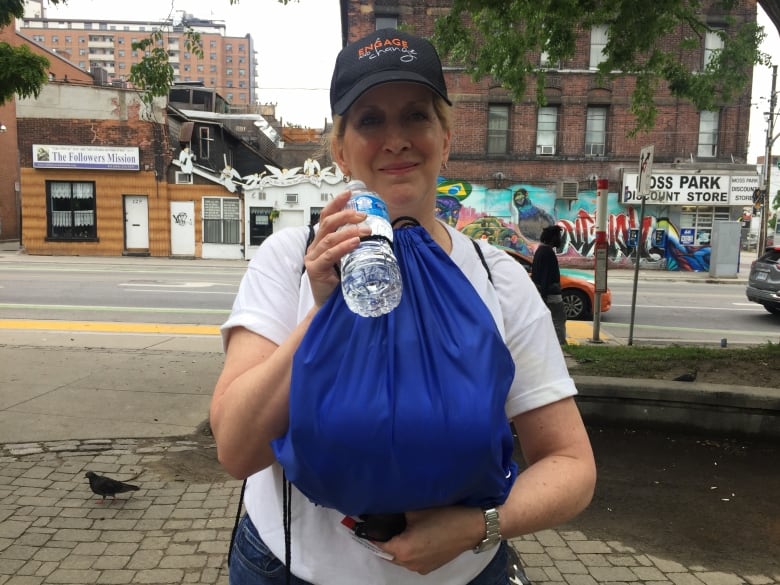 Steinhauer has also been handing out thousands of bottles of water. (Lorenda Reddekopp/CBC News)

Steinhauer plans to hand out 3,000 of these kits, although the groups she works with say there’s need for far more.

“It’s really sad… this is the worst we’ve ever seen,” Steinhauer said, after close to 20 years of donating to homeless people. “Because of the refugee crisis, the agencies are full.”

Along with the summer survival kits, Steinhauer and a handful of volunteers are handing out bottled water — part of an initiative called Project Water, which is based on the idea that more homeless people die due to dehydration in hot weather than they do in the cold. Thanks to a corporate donation, her group will be giving out 300,000 bottles of water.

When is a heat alert issued? 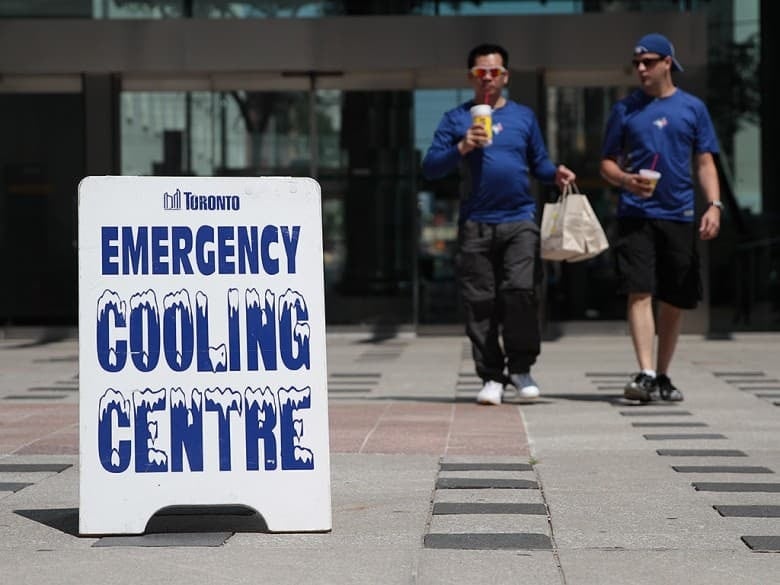 Toronto’s Metro Hall provides an air-conditioned refuge for those looking to escape the heat. (Timothy Neesam/CBC)

If it’s as hot as Environment Canada is predicting, the city will likely declare a heat alert.

Toronto’s Medical Officer of Health issues alerts after two days of highs hitting 31 degrees celsius with a humidex of 40 and nighttime lows not dipping lower than 20 degrees.

An extended heat warning is issued following three or more days of those hot conditions.

Once a heat alert is called, extra services are available for the homeless and other people considered vulnerable.

Gord Tanner, the city’s director of homelessness initiatives and prevention, says the city has seen an “unprecedented growth” in people considered homeless.

He says on top of the 7,000 beds the city offers at shelters, there are an extra 500 people in respite centres which opened in winter and are set to remain open all summer. That’s in addition to the 800 temporary spots opened at two college dormitories to house refugees.